before a track could be used for serius racing and not only for practice, there must be a lapcounting system.
Post Reply
3 posts • Page 1 of 1 When I first experimented with a lap counter some time ago, all seemed fine but this time I have had more problems. The 5v counters which I used initially were no longer available and the higher voltage ones I did get seemed less reliable. The main problem was getting a double count each time. The counters I am now using have two downsides - the digits are small and are not backlit, so not so easy to read. However they are very cheap, power is a 1.5v AAA cell, they need only two wires to connect to the sensor and they work well. However I must admit that part of the problem was the extra magnets in the car, mainly those holding the battery in place, which were interfering with the sensor switches. I have reduced these in size, now using three instead of two to hold the battery in place and all now seems good.

The pic. shows the reed switches being installed. I have discovered that there are some switches made with different sensitivities.
In view of the problems I had, we need the least sensitive switch. I have only found one such switch so far ( Comus SPST-NO 40-50AT) The At being the sensitivity range. This is fitted flush with the track surface and operated by a 3mm diam x 2mm magnet under the car. So the magnets are approx. 2mm above the switch. There are 4 other similar magnets press fitted into the chassis at 10mm spacings across.

Tried the lapcounter today first time this year. Cars are going faster now but, after a few tweaks, it worked well'
What I do miss however, for testing cars, is a lap timing facility. Can anyone (Kim?) suggest a simple timer, operating from the reed switch signal. Just one lap would be ok. 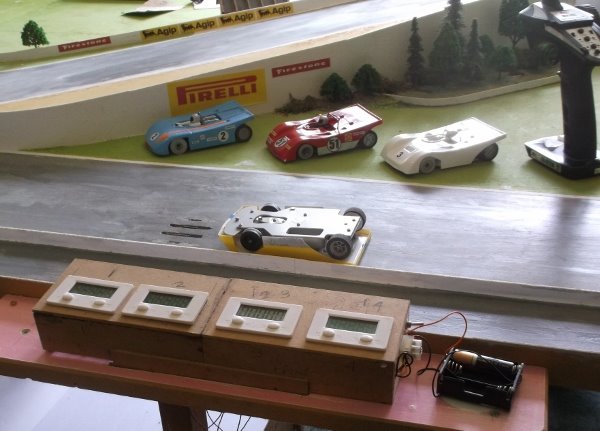 Im out skiing this weekend,. Back on wedensday. But from the top og my head,. Reedswitch should work om any PC timing program as analog input.

But so should also any irdiode with a resistor. And the sensor PCB i make. As long as you dont need to separate different cars.
Racing Regards